To share your memory on the wall of Annie Jones, sign in using one of the following options:

Print
Mrs. Annie Ruth Jones was born on September 12, 1945 in Temple, Georgia to the late Joe and Minnie Edwards.

Annie attended Harrison High School. After graduation she furthered her education at Blanton Business College where she received ... Read More
Mrs. Annie Ruth Jones was born on September 12, 1945 in Temple, Georgia to the late Joe and Minnie Edwards.

Annie attended Harrison High School. After graduation she furthered her education at Blanton Business College where she received an Associates Degree in accounting. She then began her career in accounts receivables in the accounting department at Northside Hospital; where she later retired from.

At an early age Annie gave her life to Christ. She was a very dedicated member at First Mount Pleasant Baptist Church in Atlanta, Georgia, where she was involved in a number of organizations.

To send flowers to the family or plant a tree in memory of Annie Ruth Jones (Edwards), please visit our Heartfelt Sympathies Store.

Receive notifications about information and event scheduling for Annie

We encourage you to share your most beloved memories of Annie here, so that the family and other loved ones can always see it. You can upload cherished photographs, or share your favorite stories, and can even comment on those shared by others.

Ron & Darlene Cochran, Cicely A. Kelley, and other have sent flowers to the family of Annie Ruth Jones (Edwards).
Show you care by sending flowers

Posted Apr 14, 2020 at 08:25am
Annie, your smile lit up a room and your heart warmed me ever time I saw you. Your spirit of wisdom and kindness will live forever in our hearts. Family, I love you all. Peace be unto to you during this time.
Comment Share
Share via:
RC

Posted Apr 13, 2020 at 11:50am
Our thoughts and prayers go out to you May God bless and keep you through these trying times. With Love, Herliner, Robert Earl and Debbie Anne

Medium Dish Garden was purchased for the family of Annie Jones. Send Flowers

Posted Apr 13, 2020 at 07:05am
Paul, with so many words to say, I want you to know that you and your family are in my prayers. We send our deepest & heartfelt condolences.

Cicely A. Kelley purchased flowers for the family of Annie Jones. Send Flowers

Flowers were purchased for the family of Annie Jones. Send Flowers 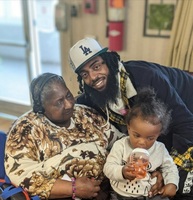