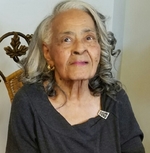 Goldie McGuire (Collins) was born November 17, 1924 to the late Frank and Genie Collins in Crawford Georgia. Goldie was the second oldest girl in a family of seven children. Goldie graduated from David T. Howard High School.
Goldie was married to the late Arthur J. McGuire, Sr. until his death in 1985. She was a housewife for 15 years, then went to work as a clerk at Robinson’s Laundromat and retired in 1986.

Goldie had a welcoming spirit that always made you feel at home in her presence. She cared about people, and loved babies and children. She enjoyed cooking and seeing others happy. Everyone was always welcomed in her home, and most of all she enjoyed family gatherings.Goldie was a giver, and wherever there was a need she would give.