To share your memory on the wall of James Holley, sign in using one of the following options:

Provide comfort for the family of James Holley with a meaningful gesture of sympathy.

James was preceded in death by his parents, James Douglas Holley Sr. and Jean Louise Brooks Holley, and his sister, Gloria Holley. James is survived by his brother, Albert Holley; his sister, Frances (Pepper) Holley; his son, Steven Holley, Steven’s wife Julie, and their two sons Edwin (EJ) and Isaiah. James has also been blessed over the years with a large and loving extended family; his children from his previous marriage to Doris Jean Lowery, son Arlyn Smith, and daughters Lynette Bacolini and Raychel Browning. Also, his children with his ex-wife Cheryl (Santiago) Holley, and his three daughters, Kera Lynn Stinchcomb, Alia Stinchcomb and Trinity Elder.

Dad was proud of and loved each and every one of his children and their families. Each held a special place in his heart. It’s a blessing to say that each one of us are proud and blessed to call him “Dad”. We all have a lifetime of loving memories and experiences that can’t be fully expressed in this writing or summed up in just a few words. This is a testament to the type of man Dad was. His first priority was making sure his family was taken care of.

For years his style was simple. Cowboy boots topped with a cowboy hat. Straw or fabric, with and without embellishment. He made country cool.

He was an avid fisherman; it would be an understatement to say that it was his passion. He would fish as long and as often as he could. And some of the fish he'd catch were truly impressive. He went to the banks to fish but would leave with more friends than you could count. He left a lasting impression on the lives of everyone he knew.

Dad was also known as James, JD, Junior, Holley, Jim, BlackBerry, Pop, Papa, Grandpa and Jaddy. He touched the lives of so many with his kindness, generosity and loving demeanor. Although he went by many names from many people, he was always that big-hearted person that would do whatever he could to help. If you needed a ride, a shoulder to cry on, some sage advise or just words of encouragement, he was there.

Dad, you've meant so much to so many. It's truly difficult to convey the impact you've had on all of our lives. We want you to know we will always love you and will miss you sorely. We pray that as you look down on us from time to time, that you will be proud of us as we continue to inspire the people around us as you've inspired all of us to do and to be our best. We love you.
Read Less

There are no events scheduled. You can still show your support by sending flowers directly to the family, or planting a memorial tree in memory of James Douglas Holley Jr..
Plant a Tree

Plant a Tree in Memory of James
Plant a tree 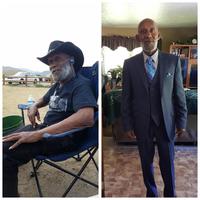