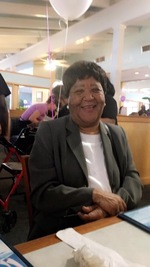 Janice Cassandra Parris Clemons was born on April 12, 1943 in Atlanta, Georgia and departed this life on April 30, 2021 at the bountiful age of 78. Janice was born to the late William Guy Parris and Antoinette Sophia (Howell) Parris. She was an only child.

Janice matriculated through the Atlanta public school system after attending Rush Memorial Elementary. She began attending E.A. Ware Elementary in 3rd grade where she was skipped to a higher grade. She began friendships in elementary and high school that she maintained until the day of her passing. She graduated from Booker T. Washington High School in 1960. She obtained post-secondary training through the Manpower program which excellently trained her in her life- long profession as a secretary. Janice was one of a handful of secretaries who first integrated the Georgia State Department of Education. She retired as secretary after 34 years of service.

At age 15, Janice met the love of her life, Harold Clemons. They later married and from this union had two sons and two daughters, Raymond, Toni, Michael and Michelle. Although they later divorced, Janice and Harold remained life-long friends and soulmates, talking with each other almost daily, until his transition in 2008.

Janice had a rich spiritual history and relationship with Jesus Christ. She was a loving and committed member of World Changers Church International (WCCI) under Pastor Creflo Dollar, until the time of her passing. She was a faithful member of the interaction ministry where she would call members to pray and counsel with them at least two times weekly. She continued to use her skills as an extraordinary secretary until the day of her passing, keeping documented records of calls and prayers for each member she spoke with and prayed for, so that they were not just a name and number.

Janice was preceded in death by her firstborn, Raymond Jefferi Clemons in 1995 and her great-grandson Gabriel Eli Townes in 2013.

Janice leaves to cherish her memory and maintain her legacy of excellence, her son and daughters, Michael Andre Clemons, Michelle Andrea Clemons and Toni DeShan Clemons Ingram, her two granddaughters who adore her, Candace Nicole Ingram and Brianna Nikole Kendall, her great-grandson who she would daily kiss with a “big smooshy” Michael Levi Townes, her cousin, Jeffery Howell of Miami, dear, life-long friends, Marcella Jameson, Carolyn White and Frances Watts, former supervisor, Candace Norton, a host of friends, church members and lives that she impacted and changed for the better.