To share your memory on the wall of Robert Dorsey, sign in using one of the following options:

On October 31, 1963, Bobby married the late Barbara Ann Dorsey. Bobby worked for Baltimore Homes Installation Company until they relocated to Atlanta, GA in November 1969. He worked for Atlanta Homes and in 1978 he started his own company, Dorsey Insulation. Bobby enjoyed talking on the phone with his siblings and enjoyed spending time with his grandchildren. One of his favorite pastimes was spending time with Abigail and Zoe.

To send flowers to the family or plant a tree in memory of Robert Dorsey Sr., please visit our Heartfelt Sympathies Store.

Receive notifications about information and event scheduling for Robert

We encourage you to share your most beloved memories of Robert here, so that the family and other loved ones can always see it. You can upload cherished photographs, or share your favorite stories, and can even comment on those shared by others.

The Atwater Family, Your CEBS Family, and other have sent flowers to the family of Robert Dorsey Sr.
Show you care by sending flowers

Flowers were purchased for the family of Robert Dorsey. Send Flowers

Posted Aug 04, 2020 at 09:54am
I am so sorry for your loss. Please accept my condolences.
When we are grieving the loss of a loved one, we can find comfort from the scriptures. I found a couple scriptures at jw.org.
Psalm 55:22 promises that God will sustain us if we just throw our burdens on him. So we need to remember to pray.
I look forward to seeing him in the resurrection when he will again be enjoying friends/family. (John 5:28,29).
I hope these scriptures bring you as much comfort as they bring me.

Posted Jul 30, 2020 at 05:52pm
Hi Tan , We were so sad and hurt to hear about Bobby. I lived next door to you guys until I went off to the Navy in 1976. My mom and sister Lorraine took care of you when you were a baby. My family and your mom and dad were always chatting each other up whenever we saw each other out doing yard work. Bobby was always on the go making a living for his family. He would always throw his hand up on his way out the driveway. I really respected him for his Entrepreneurial way of gettin that money 💰. Bobby never wavered in his work ethic. The man loved his Cadillac. He will be missed. 😟I’m here for you Tan. We love you.🙏🏽💞Tony Buster and family.
Comment Share
Share via:
TN

Posted Jul 30, 2020 at 12:14pm
Always a quiet but gentle soul that greeted me with the biggest smile that I will never forget. It still amazes how friends become family. It was a joy to have known you for so many years and you will be missed. To Tan, Abigail, Zoe and the entire family my sincere condolences to you and yours from ours. May the Lord continue to strengthen you during this most difficult time. And know that your extended family is here with open arms. Love you all!
The Nash Family ❤️
Comment Share
Share via:
OT

As I pondered what I can possibly share to my family to add some sense of comfort, I asked myself what Bobby and I would be talking about right now. My mind became flooded with stories, stories, stories.
During our early childhood we lived next door to the Dorsey cousins. Bobby’s mother and my mom were raised like sisters. Thus se was called Sis Jeanette and cousin Bobby was always called brother by my mom. Coming from a family of six girls, the Dorsey boys were like our brothers and Paulette and Ocelia, our sisters with a bond never to be broken.
Whenever there was a thunderstorm brewing and dad was at work, Bobby would come up to our 3 room little house and help us down the path to wait out the storm with their family. He would carry my oldest sister on his back as she was disabled and couldn’t walk. Mom just didn’t like thunderstorms!
We spent hours at great grandma Emma’s house which was just down the path from Pop Pop´s house. Between the three properties there was an abundance of fruit trees, nuts and wild berries, peaches, apples, plums, cherries. We ate the God-Given and Pop Pop´s grape harbor, organic way.
We were fortunate to be able to watch T.V. at the Dorsey’s as they were one of a few families in the community with a T.V....Bobby’s favorite, Westerns. We watched and talked about them for hours during my visits to Atlanta in our adult years.
My dad took Bobby under his wings because he likes his entrepreneurial style and artistry. Bobby reminded me that when dad started to build our home on Freetown road, he helped to dig out the basement and was taught to do a lot of the carpentry work. Keep in mind that we are talking about a ten-year-old boy! The seed from his construction company were being planted even at that young age.
Bobby reminded me with great pride the many times he traveled from place to place in my dad’s truck. My sisters and I scrambled for the front seat. When Bobby was with us, the contest ended because Bobby always had the special front seat. He used to tell me how much he learned from my father, cousin Morris. My sisters and I were content to sit in the back of the paneled truck on wooden benches custom made by my dad. I often said I was not great at geography I never saw where I was going in the back of the paneled truck. Since dad was the manager of the Freetown Clippers baseball team, Bobby traveled with dad frequently to other communities for ball game, always gleaming as much wisdom from my dad as he could from that front seat. Bobby was a very SPECIAL BROTHER indeed.
My mind goes back to Bates High School where Bobby was the ¨Resident Student Artist¨. He was excused from any class at a moment notice to do his artistic magic for a school program. He worked in a quiet diligent manner. My dad liked that in Bobby and supported that same manner that was in me, giving me space to create my way.
I got married immediately after collage and moved to Virginia. Many years would go by without visual contact with Bobby, but we always exchanged cards on our May birthday.
Years passed and I finally took a trip to Atlanta to spend time with my Dorsey Cousins, Bobby and Ocelia. That’s when I saw the other Bobby that I learned to love: the love and care of Jan and his granddaughter Abigail and Zoe. The stories grew as I watched his heart-warming love with those three.
Just as my dad mentored Bobby, so many have been touched by the quiet manner of my cousin Bobby. Thank you God for sending him to us for 80 years. 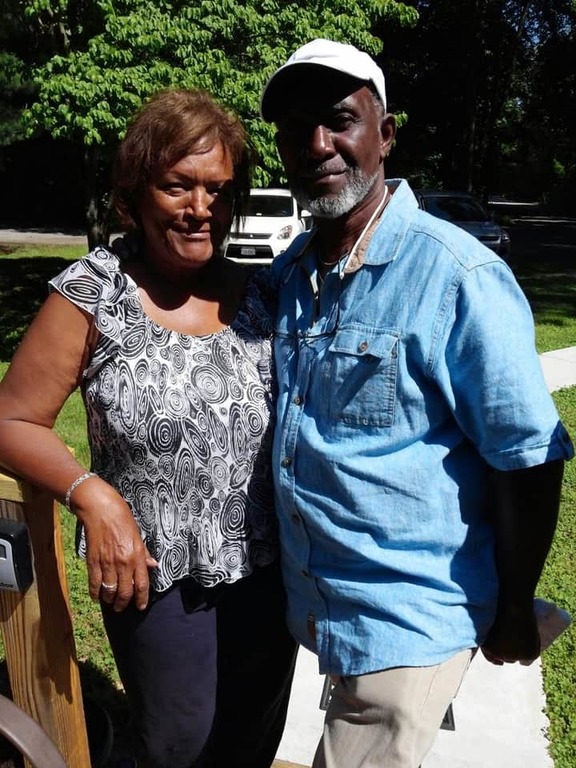 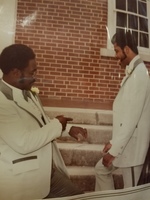 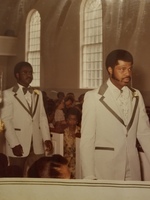 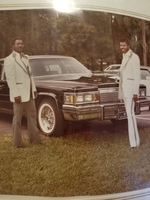