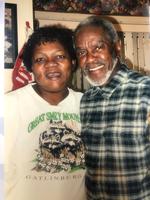 Tommy Lee Bolden was born November 24, 1936 in Sandersville, GA to the late Willie A. and Mattie Lou Bolden. Tommy was one of seven children born to this union.

Tommy was a hardworking and dedicated family provider. During his lifetime he worked in several professions. Tommy worked for Delta Airlines, he also worked as a brick mason, and finally worked for Dexter Williams Properties until his retirement.

Tommy had a love for sports; baseball, NASCAR, and pro wrestling were his top choices. His favorite NFL team was his hometown Atlanta Falcons. Tommy also enjoyed watching westerns. He loved to play with his kids. One of his favorite activities was to race against them, and to beat them. Tommy enjoyed life, and people of all ages.

Tommy Lee Bolden entered into eternal rest on the morning of June 17, 2019. He leaves to cherish his memory his loving wife, Earline; two children, Tamara and Suganvia; one grandchild, Alexandria L. Royster; four siblings, Catherine A. Bolden, Mattie Harris (Joe), Walter Bolden, and Betty J. Bolden; one aunt, Sadie B. Gaines, and a host of cousins, nieces and nephews, and his beloved dog Karma.