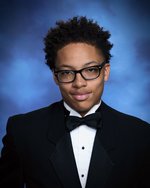 King Tyvis Roinard Hicks, better known as Ty, went home to be with the LORD. He was born at Dekalb Medical Center on July 15, 2002 and gained his wings on May 8, 2020.

He was a dedicated member of Word of Faith Family Worship Cathedral led by Bishop Dale C. Bronner, Sr since birth. This God-fearing young man served in many ministries throughout the church. However, the Hospitality Ministry was his true calling. His gift of hospitality extended outside the walls of the church.

His love of sports began at the age of 3, where he began playing T-ball at the East Point Recreation Center. He also played travel baseball with Foundation Sports and Elevate. During his stint with baseball, he added football and basketball to his sports repertoire. He began playing football at Forest Park Recreation Center at the age of 5. He started playing basketball at the age of 5 at College Park Recreation Center. He excelled in all of these sports, but he loved basketball the most. He had to end his love of playing sports once he was diagnosed with hypertrophic cardiomyopathy. He did not allow this diagnosis to stop him from contributing to the sports community. He became a sports manager for basketball and soccer at Hapeville Charter Schools. He also worked the scoreboard and concession stand at the organizations where he played as well as his school.

He attended Mary McLeod Bethune Elementary where he learned sign language and won a MP3 player at a sign language competition. Then he went on to Hapeville Charter Middle School and Hapeville Charter Career Academy where he graduated in May of 2020. He was accepted into several colleges. However, he chose to attended Albany State University where he was planning to get a degree in Mass Communications. He was planning on becoming a Radio Sports Broadcaster.

His legacy will live on through his mother and father Mygnon “Mimi” and Thomas “Roy” Hicks, II. His sisters Jessica, Thomaria and T’yana and brother TJ. Grandmothers Valeria Wilridge, Lauretta Pazant and Irene Hicks. His god-sisters Darian Ashley Lee and Brianna Henderson and god-brothers Jordan Jenkins, Brandon and Brian Henderson. His god parents Tony and Tanevery Jenkins and James and Sadonya Henderson. A host of aunts, uncles, cousins, nieces and nephews. He had a special relationship with his niece Aariyah whom he affectionately called “cutie”. He also had a special friendship with Jarin Mobasshira, Savion Smith and Armani Hitchcock.

“We know that God causes everything to WORK TOGETHER FOR THE GOOD of those who love God and are called according to his purpose for them” Romans 8:28